Autumn in the Clyne Valley, Swansea

Video of an Autumn walk in a local woodland in Swansea, Wales:

A video of my local park - Singleton Park in Swansea, Wales - filmed this Spring. The music accompanying the visuals is: Beethoven's Piano Sonata No. 11 in B Flat Major, Opus 22 - 1. Allegro con brio:

Some dandelion seedheads filmed in the Cotswolds back on May 25th; the soundtrack is a rather nice, gentle piece of mediaeval-sounding music:

Some video footage which I took recently on a lovely sunny evening in mid Wales. I was in the hide with ten others, most of whom were taking photos, so that is the clicking you can hear in the background:

Some mutual-grooming and a bit of rough-and-tumble at the badgers' sett:

Hopefully, some cubs will be appearing above ground before too long.
Posted by J at 21:30 No comments:

Badgers Digging Out Their Sett

Some recent activity at the badgers' sett I've been monitoring:

Some recent footage of Tawny Owls filmed after dark in my local park, using the infrared setting on my Panasonic camcorder and an infrared torch:

I came across this Stock Dove in Singleton Park yesterday:

Pretty sure it's only the second one I've seen there.
Posted by J at 19:24 No comments:

A Frog On The Footpath

I almost trod on this frog as I was walking home on February 27th, as it crossed the footpath in front of me. After I'd taken some footage and put my camera away, I notice it had hopped into the road and looked likely to meet a grisly fate under the wheels of a passing car, so I picked it up and carried it to the other side. It thereupon tried to climb a vertical concrete wall, before giving up on that and sitting bewildered for a while in the middle of the pavement, where it was almost squashed by several passers-by. I picked it up again, and found an area of long grass and undergrowth, where I put it down, hoping it was a safe haven from the traffic.
Filmed with the infrared setting on my Panasonic HC-W850 camcorder.

My trail camera captured this badger mating behaviour recently, which is hopefully a sign that there will be cubs at this sett this season:

I've become quite enamoured of the architecture of traditional British churches of late, and have been photographing a few recently, as well as looking through my archives to search for any I may have already photographed. Here's a photo of the beautiful St. Paul's Church - in Sketty, Swansea - pictured during a rare snowfall on December 17th, 2010: 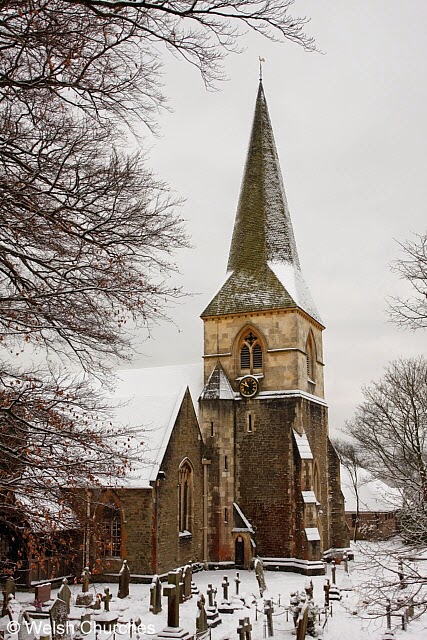 Rather than post any more church pictures here, I'm in the process of gathering some pictures together at my new website, Welsh Churches.
Do take a look and click the link if you're interested in this kind of thing!
Posted by J at 14:29 3 comments:

Some footage of a Grey Squirrel feeding in the snow, filmed on the same day as the last video:

Still hoping for some snow here this year!
Posted by J at 18:59 No comments:

Some video footage of a rare snowfall in Swansea, back on January 23rd, 2013: